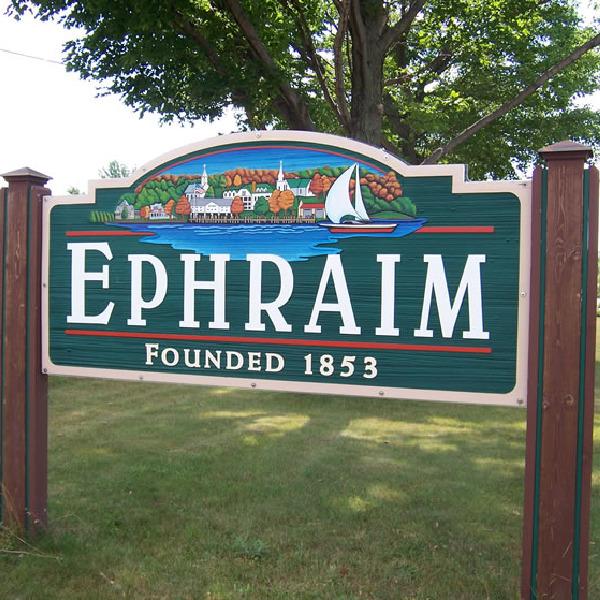 Bird monitoring includes phenology records for both Peninsula State Park and Ephraim. More than 18 years of data, and ongoing. Rare data is also filed with the Natural Heritage Inventory.

Though Peninsula State Park safeguards 3,775 acres, Ephraim’s smaller holdings are just as compelling. The Ephraim Preserve at Anderson Pond is a 27-acre Door County Land Trust property. Ephraim resident Susan Peterson has documented 31 nesting species along the site’s ancient beach ridge and wooded bluffs. Another interesting area is the Ephraim Wetlands Preserve located south of the Village. A quiet hike through this site’s maze of boardwalks delivers sightings of migrating Song Sparrows in May, the “teacher-teacher-teacher” sound of the Ovenbird, and (if you’re very, very lucky) a glimpse of a different kind of flying jewel, the endangered Hines Emerald Dragonfly documented there several years ago. This site was saved from development nearly two decades ago.

Of course, it’s the shoreline that residents and visitors can’t get enough of; nor can the birds. It’s a cinch to spot Mallards and Ring-billed Gulls. Bring along binoculars and you’ll see much more. Until Green Bay freezes over, you can also catch a glimpse of Bufflehead and Common Goldeneye Ducks offshore. Come summer, Bonaparte's Gulls may stop over in the water across from Wilson’s Restaurant. Killdeer stick around all summer while other shorebirds, such as the Least Sandpiper, skitter across the sand flats, poking longish bills in search of snails before journeying further north.

“The Ephraim Business Council thanks the Village of Ephraim, Peninsula State Park and community members for their partnership in gaining Bird City designation for Ephraim,” said Willems. “The park is an asset to our community. This designation compliments the diverse offerings of the village and we hope it opens doors to future collaboration.”

Ephraim Preserve at Anderson Pond. Located in the Village of Ephraim, this 27-acre wetland complex is surrounded by an ancient beach ridge and wooded bluffs. Cooperation between the Anderson family, the Door County Land Trust, and Village representatives enabled preservation of this landscape and demonstrates the willingness of the Village to set aside land for wildlife habitat.

Anderson Pond is the destination for hikes conducted by Sue Peterson during the Fyr Bal Festival. In addition to hikes led by this local bird expert, a Bird City table was staffed by volunteers to promote bird stewardship and familiarize visitors and Ephraim residents with the initiative.

Ephraim Wetlands Preserve. Two looped trails meander through seven acres of a northern hardwood swamp. The land was once slated for development and partially cut-over, but local residents worked with Ephraim Village representatives to rescue it. Boardwalks make the most of the trail system accessible. Nature interpretation enhances the visitor’s experience. Invasive species work includes the removal of Japanese Barberry, often spread by birds. See online for more information.

The Village of Ephraim and Peninsula State Park partnered to gain Bird City recognition. Bird City status recognizes the importance of Peninsula and Ephraim as a migration corridor, as Wisconsin Great Birding Trail destinations, and as places attractive to eco-tourists.

“The people who fought to establish Peninsula knew it was an irreplaceable landscape,” said Peninsula Naturalist Kathleen Harris, who worked on the Bird City application with the Ephraim Business Council’s Tourism Administrator. “Some of those people were Ephraim residents and along the way they set aside wonderful gems in their own village.”

EAB Purple Traps. Since 2011, Peninsula State Park in cooperation with DNR foresters and the Department of Agriculture, hangs and monitors Emerald Ash Borer traps. Prior to 2011, selected trees were girdled for early detection.

Invasive Species Management. Control of Buckthorn, Garlic Mustard, Japanese Barberry and Honeysuckle has occurred on park property (including property in the village of Ephraim) since 2001. In 2010, Friends of Peninsula State Park worked with TopJobs (a diversity hiring program) and also hired private contractors whose primary duty was control of terrestrial invasives.

Plantation Thinning. DNR Forester Bill McNee has consulted with park property staff to thin several of the park’s 25 tree plantations. In 2011, inventory work along Hwy 42 related to proposed thinning occurred. Buckthorn and honeysuckle are slated for eradication and control, which will be financially supported by Friends of Peninsula and government grants.

In spring 2013, field training on Beech Bark Disease was promoted and facilitated. DNR Forest Disease Specialist Linda Williams was one of the experts training participants how to recognize the disease and manage for it. Beech Scale was monitored in Peninsula in 2013.

Forest management continued at Peninsula State Park with removal of invasive Honeysuckle along Highway 42. Scotch Pine will be removed from specific plantations in the park in 2014. Two purple traps were set up in Peninsula in 2013, and no Emerald Ash Beetles were detected.

This past October (2015) loggers selectively thinned a number of conifer plantations and removed Scotch pine on a variety of small parcels throughout the park. The goal was to remove the non-native honeysuckle and species often planted for Christmas trees that can be invasive, competing with or displacing native vegetation. The scope of the project encompasses 72 acres throughout the park. The logging continued through March of 2016, and then resumed again late October 2016 through March 2017.

“The Truth about Cats and Wildlife.” This American Bird Conservancy Flyer “mini-flyer” was laminated and posted at the Ephraim Information Center and the White Cedar Nature Center. Take-home copies are also available for visitors.

“Keeping Cats Indoors Isn’t Just for the Birds.” This American Bird Conservancy flyer was laminated and posted at the Ephraim Information Center and the White Cedar Nature Center.

Cat’s Indoors Coloring Page. Copies of this American Bird Conservancy coloring page were photocopied and made available to young visitors at the Ephraim Information Center and the White Cedar Nature Center.

Participation in International Coastal Clean-up. For the past several years, visitors in Ephraim and Fish Creek have participated in the Great Lakes Alliance Coastal Clean-up during September. Peninsula State Park is the local sponsor.

Participation in the Christmas Bird Count. The Village of Ephraim has been represented in the annual Christmas Bird Count for numerous years now. Peninsula Park is a strong representative in the surveys. Also, Ephraim residents have conducted surveys in nearby Amble as well.

The Village of Ephraim celebrates Fyr Bal Festival annually. Fyr Bal is the pillar Ephraim event, enjoyed by residents, business people and visitors alike. Fyr Bal welcomes more than 35 vendors -- artisans, food sales and non-profits. Starting in 2010, a 10’x10’ Bird City booth has been featured at the festival. The booth is sponsored by Peninsula State Park, the Village of Ephraim, and the Ephraim Business Council. The Bird City booth features birding literature and Bird City merchandise supplied by Bird City Wisconsin and Peninsula State Park. The purpose of the booth is to educate the public about Bird City Wisconsin’s mission and to highlight the unique benefits certification will bring to Ephraim and Peninsula State Park.

This past year the booth was open 10 am – 5 pm. In conjunction with the Bird City booth, the Door County Land Trust (DCLT) led guided hikes through the Ephraim Preserve at Anderson Pond from 12:00 and 3:00 p.m. The DCLT put an International Migratory Bird Day spin on hikes, highlighting the specific species of birds found at the Ephraim Preserve and sharing birding information unique to the area. Sue Peterson, a local avid birder, gave a brief talk prior to the hikes. Sue shared her birding journals and showed some of the records she has kept over the years. Hikers were excited to hear about the Bird City opportunities for Ephraim. Peninsula State Park, the Village of Ephraim and the Ephraim Business Council in conjunction with the DCLT plan to continue the Bird City booth and hikes on Fyr Bal Festival Saturday annually and celebrate IMBD.