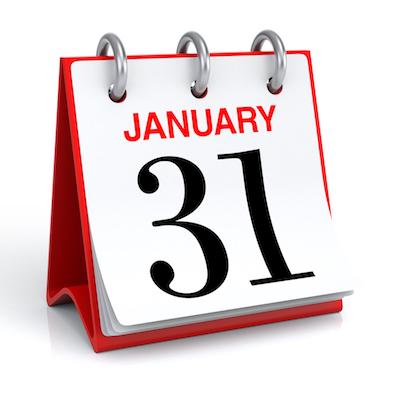 Thanksgiving and the end of November mean that only two months remain for Bird City communities to submit their 2021 renewals.

As in previous years, the entire renewal process can be completed electronically, on the Bird City Wisconsin website. Just log in and then click on "APPLY/RENEW" for detailed instructions and to get started. The renewal fee is $125.

Unlike in previous years, we will not penalize any community that was unable to celebrate World Migratory Bird Day in 2020. We recognize that public health restrictions may have kept you from holding outdoor events or other gatherings this year. In your application, please describe events that you had planned but were unable to do, tell us about events that you held virtually (please include links), and, most important, tell us what you're planning for World Migratory Bird Day in the year to come.

Remember, renewing is how your community can be recognized publicly for the steps it has taken to be friendly to birds and healthy for people. It’s also a great way to let the world know that your hometown is a desirable place to work, live, take a vacation, and do some bird watching, and it signals that you want to be counted in Bird City’s statewide network of conservation advocates. Start work on your renewal today!

How to renew your Bird City status.

Visit our application and renewal page.

See a list or map of Bird City communities. 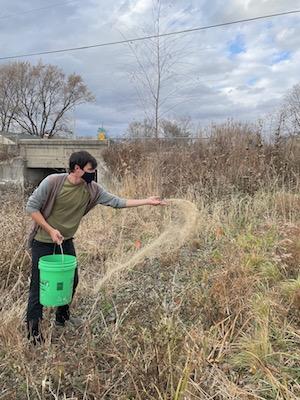 Jeff Steele, a board member of both the Friends of Starkweather Creek and Wild Ones Madison, reports that the Friends, the Eken Park Neighborhood Association, Wild Ones, and the City of Madison Engineering Department made excellent progress reclaiming and restoring a small wet-mesic native prairie along Starkweather Creek in Madison.

Bird City Wisconsin contributed $190 to the project. The sum was meant to cover the purchase of a fall bioswale seed mix, but the Engineering Department soon discovered it could provide many of the more common species in the mix from their own collection efforts. “This gave us a rare opportunity to focus our funds on more conservative species not typically included in restorations due to their price,” Jeff writes.

He and his colleagues created a custom seed mix from Prairie Moon Nursery in which they tried to include all the species that John T. Curtis listed in The Vegetation of Wisconsin as members of the wet prairie/sedge meadow continuum. The custom mix ultimately included 40 species of grasses, sedges, and wildflowers.

“Rare species such as hairy valerian, snowy campion, prairie phlox, pale spiked lobelia, and bottle gentian were selected for their showiness and ecological benefit,” Jeff writes. “When combined with the seed collected by our volunteers as well as the seeds from City Engineering, 109 species were placed on the site, providing one of the most diverse, complete wet prairie restoration seedings I have had the pleasure of working with.”

Jeff says he’s hopeful that the seeding will provide an adequate foundation for the site to recover to its pre-settlement condition, serving as an example of how to achieve success in wet prairie restorations and guiding other projects in the watershed.

Read how the City of Bayfield used its small grant. 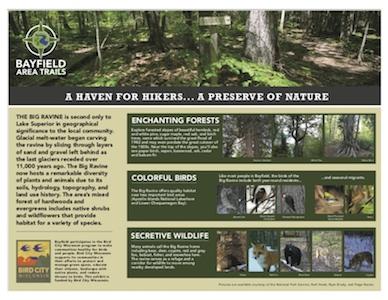 Kate Kitchell, chair of the City of Bayfield’s Parks and Recreation Committee, reports that the city initiated a project to enhance access to and appreciation of the Big Ravine Preserve in 2019.

Located just a block from the city’s downtown, the preserve encompasses over 350 forested acres with a steep watershed and creek that have been protected in a natural state since the 1950s. It includes significant intact habitat for a variety of migratory and breeding birds, as well as other wildlife, and is cherished by Bayfield residents, who use it year-round for enjoying nature, bird watching, and non-motorized recreation.

A component of Bayfield’s enhancement project is creating a gateway to the preserve at the Gil Larsen Trailhead by improving physical access, adding native trees, installing a native plant garden, and describing the natural and cultural history as well as recreational opportunities. Bird City Wisconsin contributed $500 toward the creation of an interpretive sign describing the geographical significance of the Big Ravine and its enchanting forests, colorful birds, and secretive wildlife.

Kate reports that over a dozen species of native plants are now thriving in the preserve’s new native plant garden, and that butterflies, bees, and Ruby-throated Hummingbirds were all quick to visit. The impacts of the COVID-19 pandemic kept the interpretive sign from being created and installed by August, as planned, but Kate reports that the design is complete and the sign will be erected in spring 2021, after the ground thaws.

She also tells us that the Big Ravine saw unprecedented numbers of visitors this year. “We estimate three or four times more users than in previous years, including many family groups with lots of children enjoying the trails, creek, and the beauty of the ravine,” she writes. “Comments were overwhelmingly positive, including surprise about such a gem right in Bayfield’s backyard as well as plans to return.”

Read about Bayfield, a Bird City since 2012.

Read how the City of Madison used its small grant.

Bird City Wisconsin is happy to announce the recognition of a pair of new Bird Cities in 2020: Greenfield and Wauwatosa.

Greenfield’s application process was led by Renee Rollman, an engineering specialist with the city. Greenfield was recognized for its work to control invasive plant species, its longtime status as a Tree City USA, and especially for its recent restoration of Pondview Park, a 6.69-acre special open space area located in the eastern part of the city.

Established around neighborhood retention basins as part of a senior residential housing development, the park is planted with native wetland trees, shrubs, and wildflowers that provide shelter and food for waterfowl and other birds, and features an asphalt trail loop with interpretive signage. In spring 2018, the city cleared buckthorn and other invasive plants that were encroaching on the edge of the pond.

Jeff Roznowski, a board member of the Wauwatosa Chamber of Commerce, spearheaded Wauwatosa’s application. The city was recognized for a host of bird-friendly actions, including its longtime status as a Tree City USA; weed-outs and cleanups along the Menomonee River; conducting regular bird monitoring in the 60-acre maple-beech forest known as the Woodland as well as in parks in Wauwatosa; and especially for the unanimous 2019 approval of a zoning modification for a cherished parcel of land known as Sanctuary Woods.

Located east of I-41 and north of Wisconsin Avenue, 55-acre Sanctuary Woods is a small but important portion of the 1,200 acres of city land covered by the Life Sciences District Master Plan adopted by the Wauwatosa Common Council in late 2018. The area has long been known to shelter flying squirrels, Butler’s garter snakes, and other interesting wildlife, and it is well known as a haunt for Long-eared Owls and other birds and as a stopover site for migrating Monarch butterflies, yet it was not zoned as a Conservancy prior to approval of the plan. This designation was made permanent thanks to the modification adopted in December. The new zoning status (Special Purpose Conservancy, SP-CON) ensures that Sanctuary Woods is now part of an overall contiguous area of 500 acres of environmental green space that will be protected as important wildlife habitat into perpetuity.

The two Milwaukee-area communities bring to 111 the number of communities that have been recognized as Bird Cities since the program was begun in 2009.

The end of October means that it’s time for Bird City communities to start work on their 2021 renewals.

Renewing is how your community can be recognized publicly for the steps it has taken to be friendly to birds and healthy for people. It’s also a great way to let the world know that your hometown is a desirable place to work, live, take a vacation, and do some bird watching, and it signals that you want to be counted in Bird City’s statewide network of conservation advocates.

Get started now! You can complete the entire renewal process electronically, on the Bird City Wisconsin website. Renewals for 2021 are due by January 31.

How to renew your Bird City status.

Visit our application and renewal page.

See a list or map of Bird City communities.

The American Bird Conservancy, which is celebrating 25 years of conserving wild birds and their habitats throughout the Americas, is seeking to hire a coordinator for its new Bird City Americas initiative.

This will be a full-time position, and the successful applicant will be able to work remotely or can choose to join an existing ABC office in either Washington, DC, or in The Plains, Virginia.

Bird City Americas will scale up the community conservation model created by Bird City Wisconsin, which has recognized 111 communities for their commitment to bird conservation since the program was launched in 2009. The goal is to build a hemisphere-wide network that provides recognition, guidance, and encouragement to communities focused on habitat protection/management, education, and other actions to reduce threats to birds and make communities better places for people.

You can read ABC’s job posting on ZipRecruiter. It reads as follows:

The Bird City Americas coordinator should understand bird and community conservation as well as environmental education. Experience with community certification programs is a plus. The coordinator should be an organized, detail-oriented, analytical, and deadline-driven person who understands the value, formation, and maintenance of partnerships and the importance of flexibility in pursuit of overarching program goals.

The successful candidate will also be a people person who is quick on their feet and able to lead organizations considering joining the Bird City Americas program. An understanding of what motivates different segments of the population to take conservation and education action is also required.

Public speaking skills are a must. Experience in Latin America and Canada, along with some proficiency in Spanish, Brazilian Portuguese, and French, will be considered a plus.