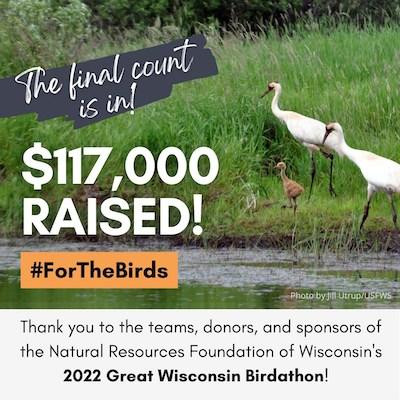 Another record-breaking season for the Great Wisconsin Birdathon is in the books, thanks to the dedication and commitment of Wisconsin’s birding community.

This annual fundraiser for the Natural Resources Foundation of Wisconsin unites bird lovers from across the state in a shared mission to support Wisconsin’s most critical and high-priority bird conservation projects. And, wow, did our birders show up this year! Our 56 teams raised $117,000 for the foundation’s Bird Protection Fund. That’s 17% above our goal!

This money was raised by families and friends who share a love of birds, by children and classrooms eager to learn about Wisconsin’s diverse number of species, by bird clubs out to make a difference, by nonprofit organizations looking to give back, and by dedicated birders like you who care deeply about bird conservation in Wisconsin. We’re so grateful to everyone who birded with us and those who donated in support of our campaign.

This season was extra special because the Great Wisconsin Birdathon has been around for a decade since its pilot year launch in 2012. The best way we could imagine celebrating this milestone is to do just what our birders did -- raise as much as we can for the birds we love.

Speaking of those birds we love, what did our teams find? Birding in 36 counties, our 56 teams found 250 species!

Four teams were lucky enough to spot our Bird of the Year, the Whooping Crane. Congrats to Cutright’s Old Coots, Millennial Falcons, I’m With the Birds, and the Horicon Marsh Wrens on this special find! Teams also found rare species, including the elusive Yellow Rail. A handful of teams reported this species, but the intrepid Lake Superior eBirders found not one but three of them!

The Good Godwits also rounded up a Black-bellied Whistling Duck and a Western Kingbird. The Scan da Avians found a Cattle Egret, Yes We Pelican! members of the Feminist Bird Club snagged a Loggerhead Shrike, and the GLC Chickadees made sure that Sheboygan’s celebrated Harlequin Ducks were represented. The combined species list includes 33 considered to be of Special Concern in Wisconsin, nine considered Threatened, and eight considered Endangered.

View the full list and enjoy bird photos submitted by our teams.

If you’re eager for more Birdathon stories, check out our Facebook page (@WIBirdathon) for team recaps and birder spotlights highlighting folks who have been birding with us for a decade -- such as Bird City Wisconsin’s Carl Schwartz, whose Cutright’s Old Coots team (@HawkeyeAndTheAncientMurrelets) topped the charts again with $18,400 raised for the birds. Incredible!

P.S. The Great Wisconsin Birdathon will return next spring! Stay tuned for an update this fall, when we will announce the next Bird Protection Fund projects that will benefit from these funds.