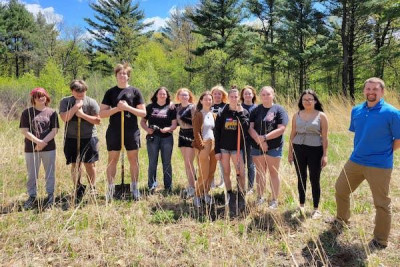 Elsewhere we described how New London, the City of Mequon, Kenosha County, and Manitowish Waters used their small grants. In this issue, we tell what the City of Wisconsin Rapids, a High Flyer and a Bird City since 2013, accomplished with its 2021 grant.

Bird City Wisconsin Rapids rep Clara Kubisiak says Bird City Wisconsin Rapids and students used the award to help revitalize a prairie adjacent to the Lincoln High School woodlot. Teachers at the high school use the woodlot and prairie in their environmental education classes, and a variety of birds nest in the woodlot and visit it while migrating.

Bird City’s grant funded the purchase of Pollinator Palooza, a mix of seeds of native species that produce not only nectar but also the habitat required by bees, butterflies, and other pollinators. Prairie Moon Nursery sells the mix in cooperation with the nonprofit Xerces Society.

The school’s revitalization effort started in October 2021, Kubisiak reports, when five students spread the seed mix in the prairie woodlot. Work continued this spring, when Bird City Wisconsin Rapids planted coreopsis, liatris, and columbine, and students in a class taught by Jeremy Radtke, an agriculture education instructor at Lincoln High School, added anise hyssop, wild blue indigo, little bluestem, and black-eyed Susans. The flowers will augment the large clusters of lupine that, according to Kubisiak, were already growing on the site in May.

Kubisiak says the prairie was established a few years ago, when buckthorn, honeysuckle bushes, and other invasive plant species were removed, and a kiosk was added.

Bird City Wisconsin Rapids plans to use the kiosk to educate city residents on the value of prairie plants and how to identify them. “We would like people to understand how the long root structures aid plants in dry weather conditions,” Kubisiak says.

This was the second year that Bird City Wisconsin awarded small grants, which are available to Bird City communities only. The grants are intended to kickstart local projects that help Bird City communities create and protect bird habitat, educate residents about positive interactions between birds and people, and reduce threats to birds.

Descriptions of projects funded by Bird City Wisconsin in 2020, the first year it awarded small grants, can be found on the Bird City website.