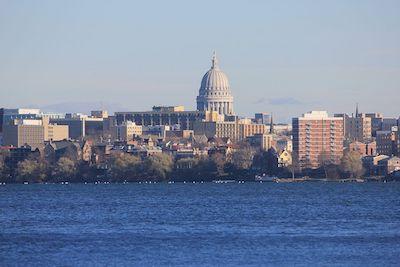 On August 16, 2022, the Dane County Circuit Court ruled in favor of birds and upheld the City of Madison's bird-friendly building ordinance, the first ever adopted in the state. The ordinance, which went into effect in 2020 and requires new large construction and expansion projects to use modern bird-safe strategies and materials, was challenged by a group of Wisconsin-area developers in 2021.

“It's hard for us to believe that this case was brought in the first place, since it's possible to design beautiful, affordable buildings that also protect birds,” said Mike Parr, President of American Bird Conservancy (ABC). “We feel like the court did the right thing in light of significant bird declines -- taking steps to protect birds from one of the largest threats they face is the right thing to do.”

On August 4, 2020, the Madison Common Council unanimously adopted a building ordinance introduced by Alders Marsha Rummel and Keith Furman, drafted by city staff, and revised with input from ABC and Madison Audubon Society. It has been in effect, without issue or contention, since October 1, 2020.

In July 2021, a group of Madison-area developers, led by the Wisconsin Institute for Law and Liberty (WILL), mounted the first-ever legal challenge to a bird-friendly building ordinance (Dane County Case Number 2021CV001729). This was concerning news for conservation groups, including ABC, which has worked diligently for years to promote life-saving bird-friendly building design legislation and to reduce the threat of window collisions to birds.

ABC, the Madison Audubon Society, and the Wisconsin Society for Ornithology filed an amicus curiae, or friend of the court, brief on April 1, 2022. It was filed with the Dane County Circuit Court as part of the ongoing legal challenge to the City of Madison's bird-friendly building ordinance initiated by a group of Wisconsin-area developers last year.

The amicus brief, which was referenced in the Dane County Circuit Court's ruling, provided important background information for the judge by summarizing the conservation crisis that window collisions pose to birds and discussing how solutions like Madison's building ordinance can save birds' lives. It also highlighted other municipalities that have enacted bird-friendly building ordinances without issue and presented research showing that window collisions in Madison are a serious local threat to birds.

Each year in the United States, up to one billion birds die following collisions with glass -- that's approximately 2.7 million birds each day. These deaths are largely preventable through the use of bird-friendly design, a set of practices that includes reducing the total amount of glass, which also saves energy and greenhouse gas emissions, and using bird-friendly building materials that help birds avoid flying into buildings. Such materials include glass with subtle patterns or other properties that make it visible to birds, solar shading, and insect screens.

Twenty-two bird-friendly building design guidelines have been adopted by states and municipalities in the United States and Canada, and many more are currently pending. Cook County, IL (2008), Toronto (2009), and San Francisco (2011) enacted their guidelines over a decade ago. Bird-friendly design is also a part of many green building guidelines, including U.S. Green Building Council's LEED program. ABC has also created a Model Ordinance.

This was the first legal challenge to any of these guidelines.

“Today Judge Trammell ruled in favor of not only the City of Madison, but also in favor of birds,” said Bryan Lenz, ABC's Bird Collisions Program Manager and a past director of Bird City Wisconsin. “Each year, thousands of birds die following collisions with glass in Madison, a problem that the City Council had the courage to do something about. I am elated to learn that the court agrees that birds are worth saving.”

Read the amicus brief filed in April 2022 by ABC, Madison Audubon, and WSO.