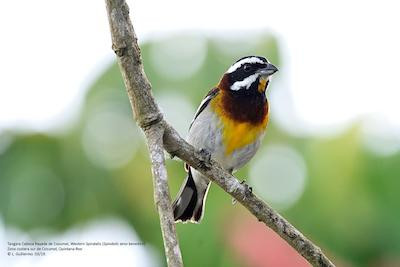 After more than two years of preparation, the island of Cozumel has been named the first Bird City in Latin America, strengthening the destination’s position on the ecotourism map. The certification was announced last month during the Cozumel Island Bird Festival by Environment for the Americas, the American Bird Conservancy, and the U.S. Fish and Wildlife Service.

The many challenges facing birds throughout the Americas have reduced breeding bird populations by three billion birds since 1970. Bringing the birds back requires sound science, effective planning, and an army of local conservationists working together across the landscapes upon which birds rely.

To help build this conservation force, ABC and EFTA created a conservation and education program known as the Bird City Network, designed to foster innovation and connections that lead to advances for birds in natural areas, parks, gardens, main streets, and backyards and to make communities better places to live.

The network was patterned after the pioneering work of Bird City Wisconsin, launched in 2010, and similar programs that followed in eight other states, including Minnesota, Texas, Maryland, Colorado, and Illinois.

Situated off the eastern coast of the Yucatán Peninsula, the island of Cozumel hosts numerous resident and migratory birds, including several endemic species and subspecies. The Foundation for Parks and Museums of Cozumel (FPMC) and other organizations have been working hard to make the island a better place for both birds and people. This work led to the island becoming a part of the Bird City Network.

In addition, the island is incorporated into the Man and the Biosphere Programme of the World Network of Biosphere Reserves-UNESCO and currently has five protected natural reserves.

They include the Laguna Colombia State Ecological Park, in Punta Sur; the Laguna Chankanaab Natural Park; the Cozumel Forests and Wetlands State Reserve; and the Cozumel Island Flora and Fauna Protection Area. Chacón Díaz said that, as a Bird City, Cozumel seeks to protect bird populations and the ecological services they provide, including pollination, seed dispersal, and pest control, benefiting other wild animals and their habitats while contributing to a healthy environment for everybody.

The biologist said that with the Bird City certification, people also benefit through ecotourism. Cozumel’s position on the nature tourism map is reinforced, making it more attractive to bird watchers and photographers, as well as attracting new businesses, diversifying and strengthening the local economy.

The Bird City Network is a flexible, widely distributed, and cost-effective model for delivering on-the-ground conservation actions for birds. The program engages partner organizations and provides tools, systems, and guidance for them to create and run their own Bird City programs.

Foundation for Parks and Museums of Cozumel

Man and the Biosphere Programme