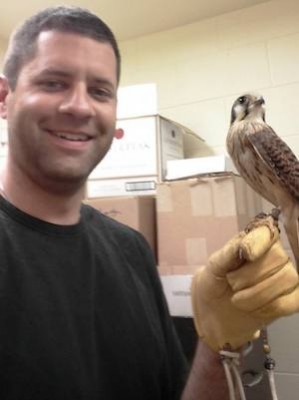 The Board of Directors for Bird City Wisconsin has elected Dr. Bryan Lenz as the program’s new Board Chair.

A Milwaukee-area native, the 40-year-old Lenz is Collisions Campaign Manager for American Bird Conservancy. Until 2018, he was state director of Bird City Wisconsin and chief scientist at the Western Great Lakes Bird and Bat Observatory in Port Washington.

As Board Chair, Lenz succeeds Carl Schwartz, who helped launched the program in 2010 and was its director until Lenz was hired in 2015. Schwartz will continue to serve on the Bird City Board, as well as on the boards of both the Wisconsin Society for Ornithology and the Observatory and on the steering committee of the second Wisconsin Breeding Bird Atlas.

Lenz capped his tenure as Bird City’s director with the news that the Milwaukee Bucks would open the world’s first bird-friendly sports and entertainment arena, upon completion of the Bucks’ application for LEED Silver® certification for Fiserv Forum. The announcement represented a significant victory for bird conservation because up to 1 billion birds die annually after colliding with glass in the United States.

In his position at American Bird Conservancy, Lenz is focusing on an area that is a cornerstone of the Bird City model: using education, research, design, technology, and legislation to reduce threats to birds and build greener communities. The target audience includes just about everyone -- elected officials, private citizens, public employees, architects, corporations, universities, and anyone else who has the power to influence the design of new buildings or the operation of existing buildings (including homes).

Modeled on the Tree City USA program, Bird City Wisconsin has developed more than 60 application criteria across six categories. If a community meets at least eight criteria, it can be recognized as an official Bird City.

Working through its website, the program has recruited both public officials and interested citizens who belong to Audubon groups, nature preserves, bird clubs, natural history museums, conservation organizations and agencies, garden clubs, eco-minded businesses, and chambers of commerce that can be effective partners for developing and implementing Bird City strategies.

Read the mission and rationale of Bird City Wisconsin.