A Milestone for Stevens Point and Dr. Kent Hall 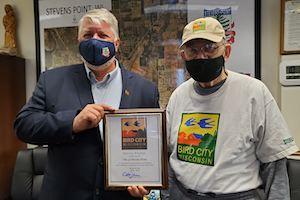 The City of Stevens Point took the occasion of its recognition as a Bird City Wisconsin community for the 12th consecutive year to honor one of its distinguished citizens who has played a pivotal role in bird conservation both locally and statewide.

“Dr. Kent Hall has been instrumental in the city receiving this award,” said Mayor Mike Wiza. “There are countless hours invested in compiling information and highlighting everything we do from a conservation standpoint, from our solar initiatives, carbon footprint reductions, composting program, habitat maintenance and restoration, and our Tree City USA status. Everything gets tied together.”

Kent is conservation chair of the Aldo Leopold Audubon Society, and Bird City Wisconsin recognition is a cooperative effort between the city and the society. Recognition is given only to municipalities that have special conservation projects for birds and a demonstrated quality of life for residents.

Stevens Point was one of 15 inaugural Bird City communities recognized in 2010. Bird City now recognizes some 100 municipalities each year, but only about 25 qualify as “High Flyer” communities. Stevens Point has attained the High Flyer level for the past 11 years.

“To be a High Flyer for 11 straight years is huge accomplishment and a testament to the knowledge and passion that Kent brings to bird conservation,” said Bird City director Chuck Hagner. “Stevens Point is a better place because of his efforts, as is the Bird City program as a whole.”

“I’d like to thank Kent for all of his dedicated work on this project," Mayor Wiza added. “He’s going to step back from his work on this, and we have several people taking the reins going forward. His passion for conservation and environmental stewardship will continue to motivate others.”

Kent was a founding member of the Bird City Wisconsin Steering Committee, on which he still serves. In that role, Hall has demonstrated his tenacious commitment to broad-scale projects that bring people together to achieve enduring conservation results. Kent brought to the launch of Bird City an impressive record as a biologist, educator, fund-raiser and bluebird fanatic, and he pooled all those experiences into guiding a program that is turning out to be the most impactful yet in his long conservation career.

In 2015 Kent was awarded the Wisconsin Society for Ornithology’s Noel J. Cutright Conservation Award for spearheading the successful restoration of the Eastern Bluebird in Wisconsin and for his leadership roles with the Wisconsin Bird Conservation Initiative (now Partnership), the Aldo Leopold society, and the Wisconsin Audubon Council, as well as his tireless advocacy for Bird City.

Kent actively recruited Stevens Point to become one of the inaugural communities, he played a similar role with the Village of Plover, and he helped mentor and recognize additional communities in that region. Internally at Bird City, he has assisted with fund-raising and championed major revisions in Bird City’s recognition criteria to emphasize sustainability, groundwater protection and the need to confront climate change.

Read about the Village of Plover.