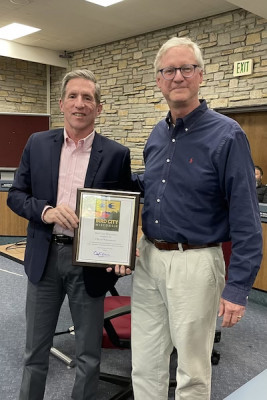 The City of Wauwatosa has become a Bird City.

At a hybrid meeting of the Common Council on June 15, 2021, Charles Hagner, director of Bird City Wisconsin, commended the City for steps it had taken to make the community healthier for birds and for people.

“As I hope everyone here knows, a number of good things are happening here in Wauwatosa,” Hagner said. He commended the City for the following actions in particular:

“Actions like these benefit birds and other wildlife and help build a connection to nature that will show current and future decision makers just how important it is to protect the natural world,” said Hagner.

Wauwatosa earned recognition as a Bird City in 2020 but delayed its in-person public award ceremony because of the pandemic. Former alderperson Jeff Roznowski, a Wauwatosa Chamber of Commerce board member, spearheaded the City’s application.

In recognition of Wauwatosa’s accomplishment, it was awarded two street signs and a 3'x5' flag bearing the colorful Bird City logo, a framed, signed commemorative plaque, and a copy of Owen Gromme’s classic book Birds of Wisconsin. Hagner presented the plaque to Mayor Dennis McBride at the council meeting.

A narrative describing the City of Wauwatosa’s bird-friendly accomplishments, along with a complete list of all communities that have earned recognition as Bird Cities, can be found on the Bird City Wisconsin website.

Bird City Wisconsin was founded in 2009. Modeled on the successful Tree City USA program of the Arbor Day Foundation, it encourages Wisconsin communities to implement sound bird-conservation practices by rewarding those that enhance the environment for birds and educate their citizens about the contributions that birds make to healthy communities.

Read how your community can become a Bird City.