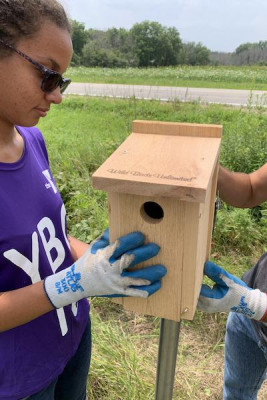 In our December 2021 issue, we described how New London used its small grant to create a fun citywide educational project featuring colorful cutouts of the swallows featured in the Bird City Wisconsin logo.

In this issue, we tell what the Mequon Nature Preserve and the City of Mequon, a Bird City since 2010 and a High Flyer, accomplished with its 2021 grant.

According to Nick Gall, Ecological Restoration Manager at the Mequon Nature Preserve, the funds were used to replace 10 of the 56 nest boxes that he and his team at the preserve use to monitor cavity-nesting Eastern Bluebirds, Tree Swallows, and House Wrens.

The new shelters replaced boxes that had been on the 510-acre property for two decades and were in disrepair, Gall reports. They are located along a transect that passes through various habitats of restored prairie, wetlands, and shrubland ecosystems.

Preserve staff members were unable to install the new boxes until the middle of July, Gall reported, too late for them to be used during the 2021 breeding season but in plenty of time to welcome returnees this spring.

“Lower nesting individual and fledgling numbers could be a result of either a late snowstorm that caught individuals migrating through the lower Midwest,” Gall explained, “or a substantial drought throughout the region that increased ant infestation in nest boxes.”

“This is particularly true of the nest boxes that were replaced through this grant, as these older boxes had wooden posts with constant ant infestations.”

The new nest boxes, by contrast, are mounted on predator-proof poles that should hinder future ant infestations.

Gall says that staff and volunteers from the preserve’s Bluebird Club look forward to monitoring the new boxes in 2022 and noting the change in usage from the previous boxes.

This was the second year that Bird City Wisconsin, a program of the Western Great Lakes Bird and Bat Observatory in Port Washington, awarded small grants, which are available to Bird City communities only.

The grants are intended to kickstart local projects that help Bird City communities create and protect bird habitat, educate residents about the many positive interactions between birds and people, and reduce threats to birds.

Read more about the City of Mequon, a High Flyer.