WMBD Theme: Dim the Lights for Birds at Night! 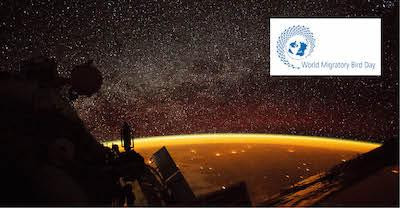 “Dim the Lights for Birds at Night!” has been selected as the official slogan for the 2022 edition of the U.N.-backed global World Migratory Bird Day campaign. This year’s focus is on the impacts of light pollution on migratory birds.

“World Migratory Bird Day 2022 is not only about raising awareness on the negative effects of light pollution on migratory birds. We also hope the campaign will trigger concrete commitments and pledges from... key stakeholders across the world,” says Amy Fraenkel, executive secretary of the Convention on Migratory Species of Wild Animals.

The convention is the only global convention specializing in the conservation of migratory species, their habitats, and their migration routes. An environmental treaty of the United Nations, the convention lays the legal foundation for internationally coordinated conservation measures throughout a migratory range.

The aim of World Migratory Bird Day is to raise awareness of light pollution in May and initiate concrete actions to tackle the problem in October. Best-practice guidelines are currently being developed to address the issue and ensure that action is taken globally to help birds migrate safely.

Artificial light is increasing globally by at least 2 percent per year, and it is known to harm many bird species. Light pollution is a significant threat to migratory birds, disorienting them when they fly at night, leading to collisions with buildings, interfering with their internal clocks, and interfering with their ability to undertake long-distance migrations.

“This year’s campaign highlights the impacts of the increasing but underestimated threat of light pollution on migratory birds," says Jacques Trouvilliez, executive secretary of the Agreement on the Conservation of African-Eurasian Migratory Waterbirds. "'Dim the Lights for Birds at Night’ sends a simple but strong message that we need to act collectively to curb the use of unnecessary light at night so that we can reduce the negative impact it has on migratory birds."

The migratory waterbirds agreement was developed under the framework of the Convention on Migratory Species and is administered by the United Nations Environment Program. The agreement is an intergovernmental treaty dedicated to the conservation of migratory waterbirds and their habitats across Africa, Europe, the Middle East, Central Asia, Greenland, and the Canadian Archipelago.

Making windows safer, day and night, is at the top of the Cornell Lab's list of seven simple actions you can take to help birds.

Solutions to light pollution are readily available. For instance, more and more cities in the world are taking measures to dim building lights during migration in spring and autumn. Further information will be made available on the World Migratory Bird Day website throughout the year.

Five actions you can take to help birds at night

Event organizers in Bird Cities are encouraged to start thinking of ways to incorporate the theme of light pollution and the slogan into activities being planned for World Migratory Bird Day.

Convention on the Conservation of Migratory Species of Wild Animals

Agreement on the Conservation of African-Eurasian Migratory Waterbirds