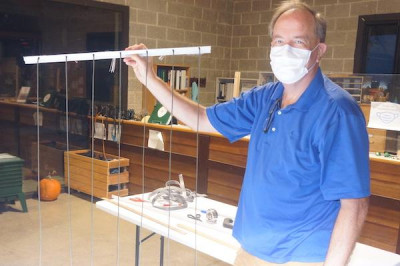 In December, we described how New London used its small grant to create a fun citywide educational project featuring colorful cutouts of the swallows featured in the Bird City Wisconsin logo.

In January, we described how the Mequon Nature Preserve and the City of Mequon, a Bird City since 2010 and a High Flyer, used its grant to replace nest boxes used to monitor bluebirds, Tree Swallows, and House Wrens.

In this issue, we tell what the Pringle Nature Center and Kenosha County, a Bird City since 2014, accomplished with their 2021 grant.

Barry Thomas, the nature center's board chair, reports that the funds supported two free educational programs aimed at preventing the No. 1 source of human-caused bird mortality in the United States -- bird-window collisions.

As many as a billion birds die after hitting windows in the United States and Canada every year, say researchers from the Smithsonian's Migratory Bird Center and the US Fish and Wildlife Service. Only predation by free-roaming cats kills more birds every year.

Contrary to conventional wisdom, the greatest mortality does not occur at gleaming, glass-covered high-rises but at shorter buildings, and especially at residences. This means that homeowners across the country have a great opportunity: By decreasing the number of birds that strike their windows, they can dramatically improve the state of our birds, hence the importance of the center's grant-supported efforts.

The first program took place at the center’s annual Fall Fun Fest and World Migratory Bird Day celebration in September. Rick Fare, a director of Racine's Hoy Audubon Society, staffed a booth where he discussed threats to migratory birds and gave visitors reflective window decals to affix to the exterior of their home windows. Attendance at the festival was estimated at 350.

The second program took place on September 29, at one of the center's monthly "Pringle Talks" sessions, where attendees heard a presentation by Fare and Thomas on preventing bird-window collisions and then constructed their own Acopian BirdSavers.

Also known as "zen wind curtains," Acopian BirdSavers are a very simple but a highly effective method of deterring bird-window collisions. They consist of lengths of dark-colored 1/8" diameter parachute cord that are suspended about three or four inches apart on the exterior of windows, creating an attractive pattern of parallel lines that birds see and avoid.

You can order BirdSavers, or find instructions for making your own, on the Acopian BirdSavers website. You can find additional resources for avoiding bird-window collisions on this website.

This was the second year that Bird City Wisconsin, a program of the Western Great Lakes Bird and Bat Observatory in Port Washington, awarded small grants, which are available to Bird City communities only.

The grants are intended to kickstart local projects that help Bird City communities create and protect bird habitat, educate residents about the many positive interactions between birds and people, and reduce threats to birds.