In addition to predators and other natural challenges to survival, birds face a number of massive threats due to human activity. Habitat loss may be the biggest of these threats, especially if one considers the entire history and prehistory of humankind, though 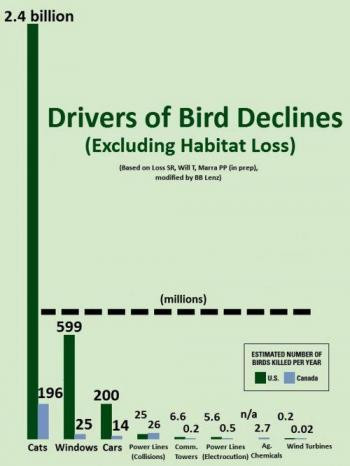 few would argue that habitat loss is a serious problem. There are also many conservation groups, citizens, and governments working to protect natural areas.

It is when one moves beyond habitat loss that the magnitude of threats to birds surprises some and becomes controversial for others. These threats can be classified as indirect or direct.

Indirect threats have a number of steps between human action and the resulting threat to birds. For example, climate change: humans add greenhouses gases to the atmosphere, these gases trap heat and warm the planet, the warming raises sea levels and changes climate patterns, which leads to rapid ecosystem changes (e.g., habitat and food availability) that harm birds.

Direct threats are, as you might expect, more direct: people erect a building, a bird hits that building, the bird dies. There are no intermediate steps. A recent study by Scott Loss, Tom Will, and Pete Marra examined non-habitat direct threats to birds in North America. There numbers, summarized to the right and discussed below, show that cats, collisions, and pesticides combine to kill BILLIONS of birds in the United States each year.